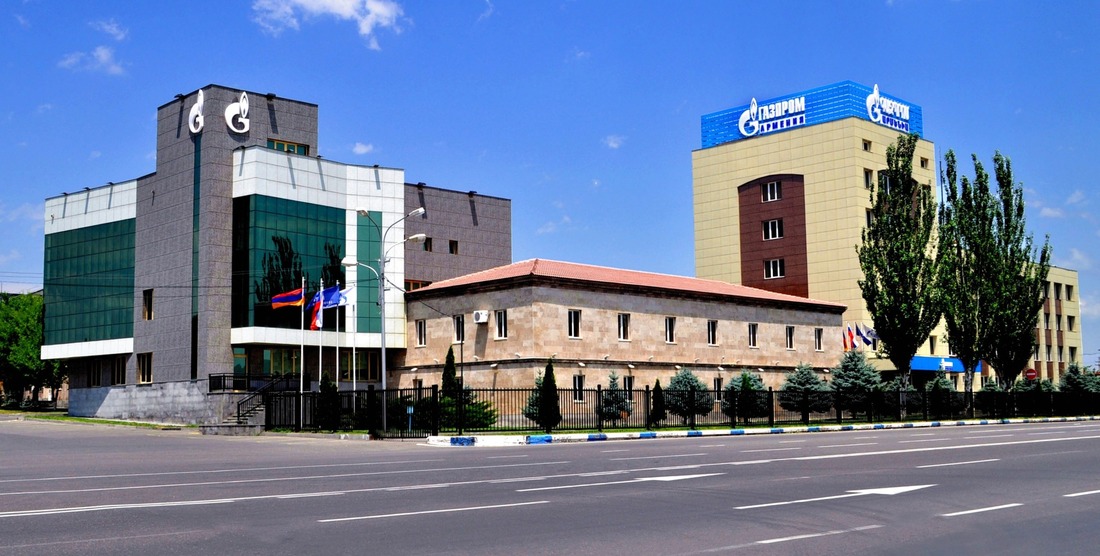 The Company has already made investments of about USD 950 million in the country and plans to make more investments with a total amount equivalent to about USD 500 million by 2030 within the framework of implementing measures envisaged by the General scheme of gas supply and gasification of the Republic of Armenia.

Strategic aim of CJSC Gazprom Armenia is creation of gas-power Company of regional significance, which will participate in energy projects both within the country and externally.

The main activities of the company:

— transmission, storage, distribution and sale of the natural gas;

— production and sale of electric power;

— guarantee of reliability and safety of exploitation of gas sector objects;

CJSC Gazprom Armenia is a vertically-integrated company. The company consists of 15 subdivisions of gasification and gas supply, which are organized by the territorial principle, branch “Engineering center”, 5 subsidiaries, as well as the enterprises “Hrazdan-5” and “Educational-sport complex”.

CJSC Gazprom Armenia is the biggest employer of the country.

NGTS consists of the following objects:

· 21 metering centers, including gas measuring station “Kokhb” on the boarder of Armenia-Georgia;

· 230 valva centers on the linear parts of gas main, 28 of which are on the gas pipeline of Iran-Armenia;

· 190 installations of electrochemical protection, including 174 cathodic and 16 drain pipes;

· Underground gas storage facility in Abovyan, which has 21 underground reservoirs and a compression center.

In Gas Distributing System, today there are 19 214 km of high, medium and low pressure gas pipelines, as well as supporting buildings. In the exploitation system, there are 2642 gas regulating points and 8568 individual regulators of gas pressure, 1433 main metering units, as well as 327 units of electrochemical protection.

Due to massive gasification of the country, today in Armenia, 641 localities use natural gas. The level of gasification in Armenia is 96%. Mentioned indicator puts Armenia on the leading positions in the world. 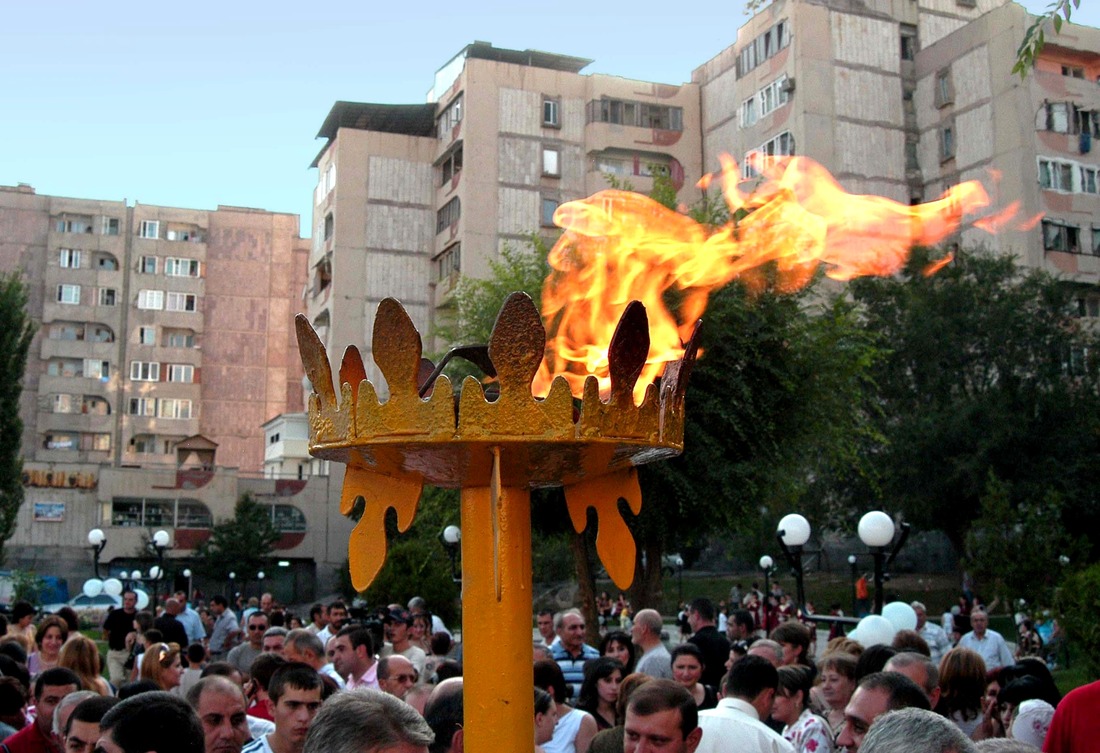 Today on the territory of Armenia there are 358 gas filling stations. About 80% of cars in the country use gas as a vehicle fuel. 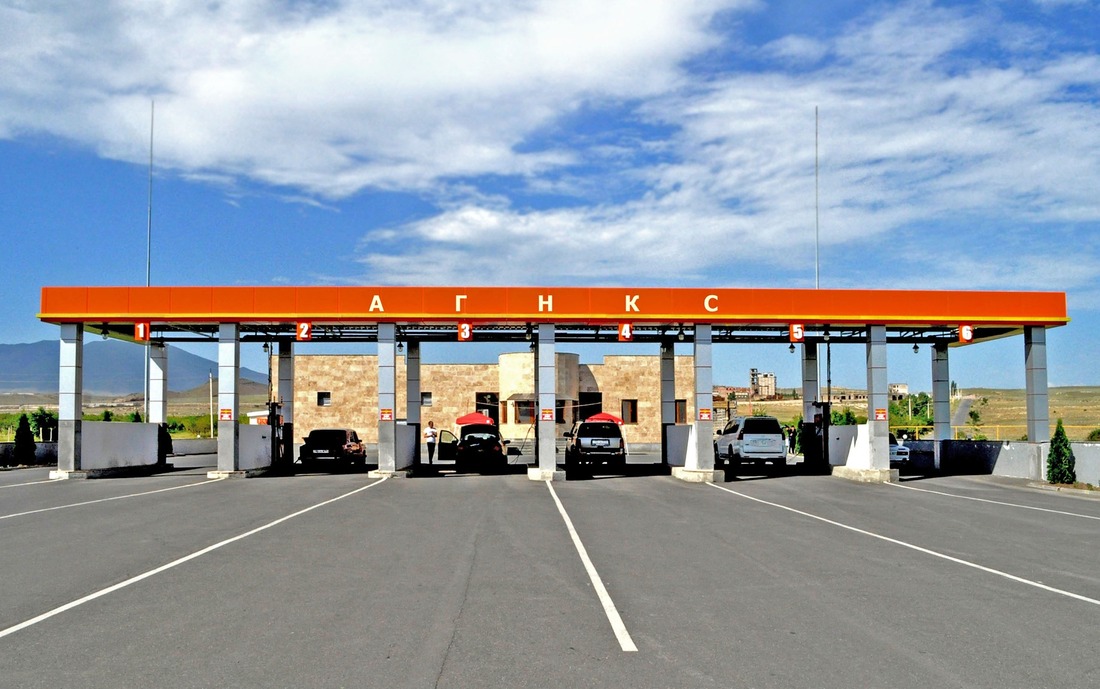 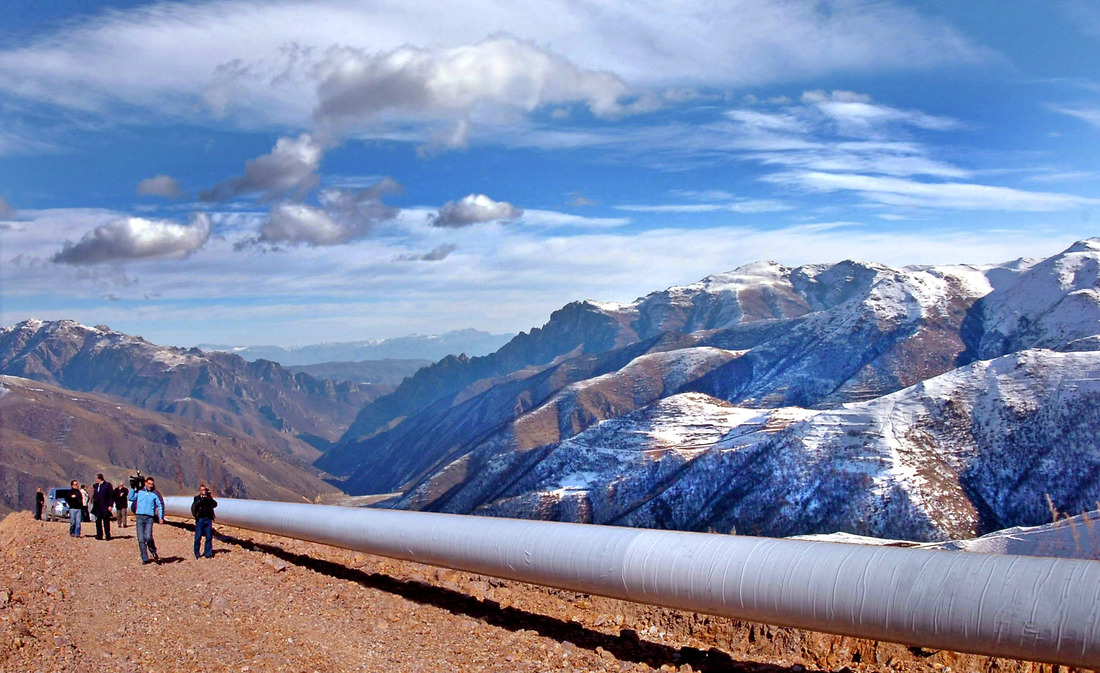 Large, unique and technically complicated project of construction of Iran-Armenia gas pipeline, has expanded the resource base of natural gas supply and created the second technological entrance to Armenia. Construction of new gas pipeline, which has length of 190 km, took place in complicated climatic conditions. One of the parts of the main gas pipeline is placed almost on the height of 3000 meters above the sea.

Power unit Hrazdan-5 — is a unique project, which has modern technological features not only in the gas-power sector of Armenia, but also of the region. Specialists of the Company created new way of electric power production: at Hrazdan-5 aero gas turbine and steam turbine technologies are combined for the first time. 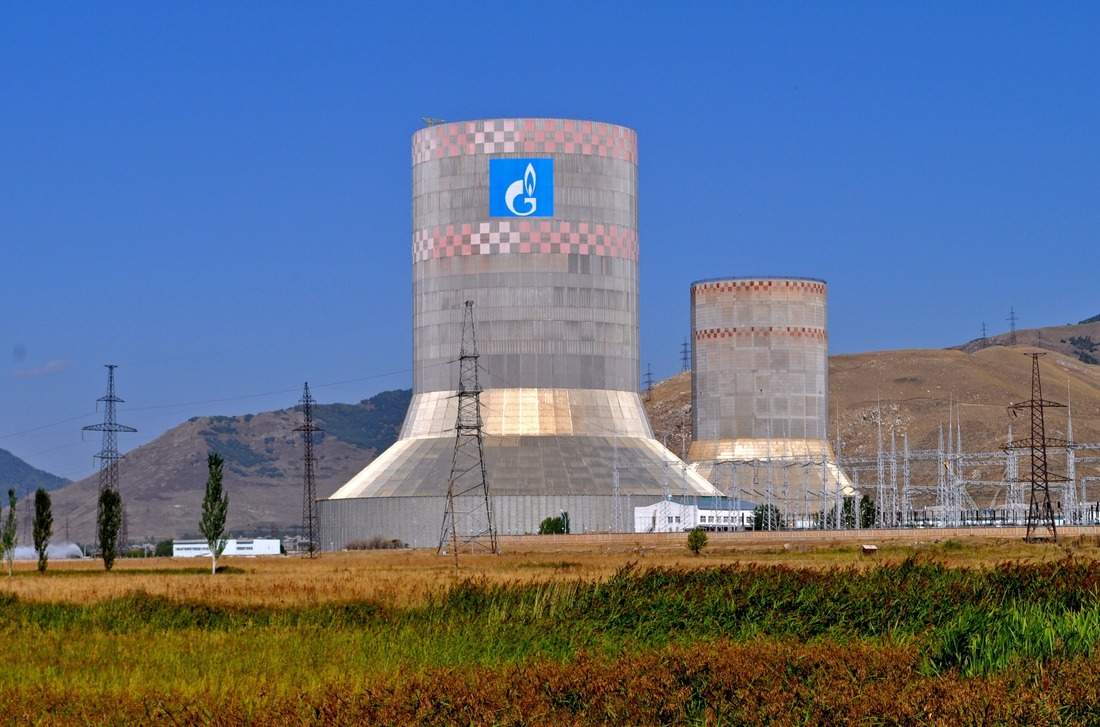 Due to massive projects done by the Company, today energy safety of Armenia is highly protected. Having two gas pipelines — on the north and on the south, as well as a gas storage facility, Armenia does not yield to other countries of the region, which have their own resources.

In the framework of guarantee of energy safety of the country, CJSC Gazprom Armenia solves another very significant issue: reconstruction of Abovyan’s underground gas storage facility. Mentioned strategic project is aimed to guarantee reliability of gasification of the country. As a result of gradual realization of the reconstruction project and modernization of UGSF, annual expansion UGSF size is planned.

Gazprom Armenia purposefully does the policy of installation of new equipment and modern technologies in the system of transmission and distribution of gas, which fosters development of the system of gas accounting and elevates total reliability of the system. In gas transmission system of the country, system SCADA is being gradually installed. It lets to control and operate the directions of natural gas transportation through the main gas pipelines.

In the frameworkof guarantee of gas supply safety and elevation of the quality of service, the program of installation of combustible gases’ alarm devices and shut-off valves (protection system) in multi-stored houses has been realized. Among CIS countries, Armenia is the first country, which started large-scale installation of security systems with the aim of exclusion of human factor in the exploitation of gas equipment and prevention of man-made disasters.

Gazprom Armenia is the largest company of Armenia and for many years constantly has been placed on the leading positions among the biggest tax payers of the country. Daily payments to the budget of the country make more than 100 million drams.

The company approaches the process of providing transparency in financial-economic activity with high responsibility. Service of audit is being provided by respected international organizations. Cooperation with financial institutions, as well as continuous business and partner relations with large banks are achieved. It proves that there is trust from international financial institutions towards Gazprom Armenia. 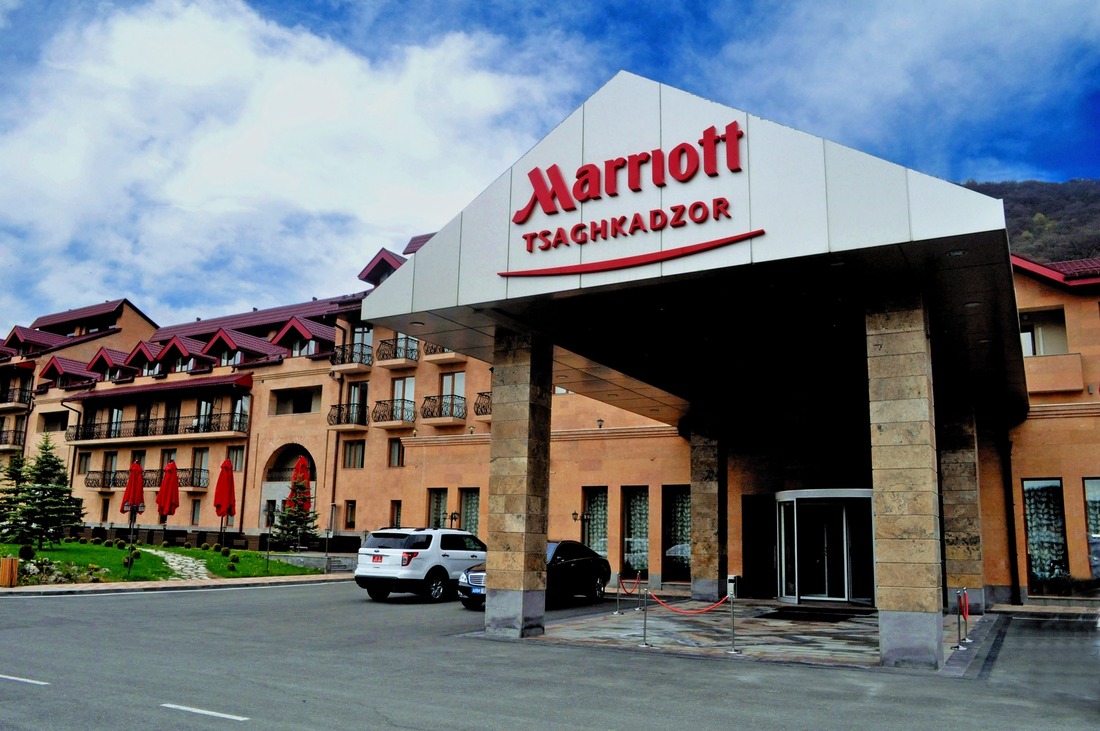 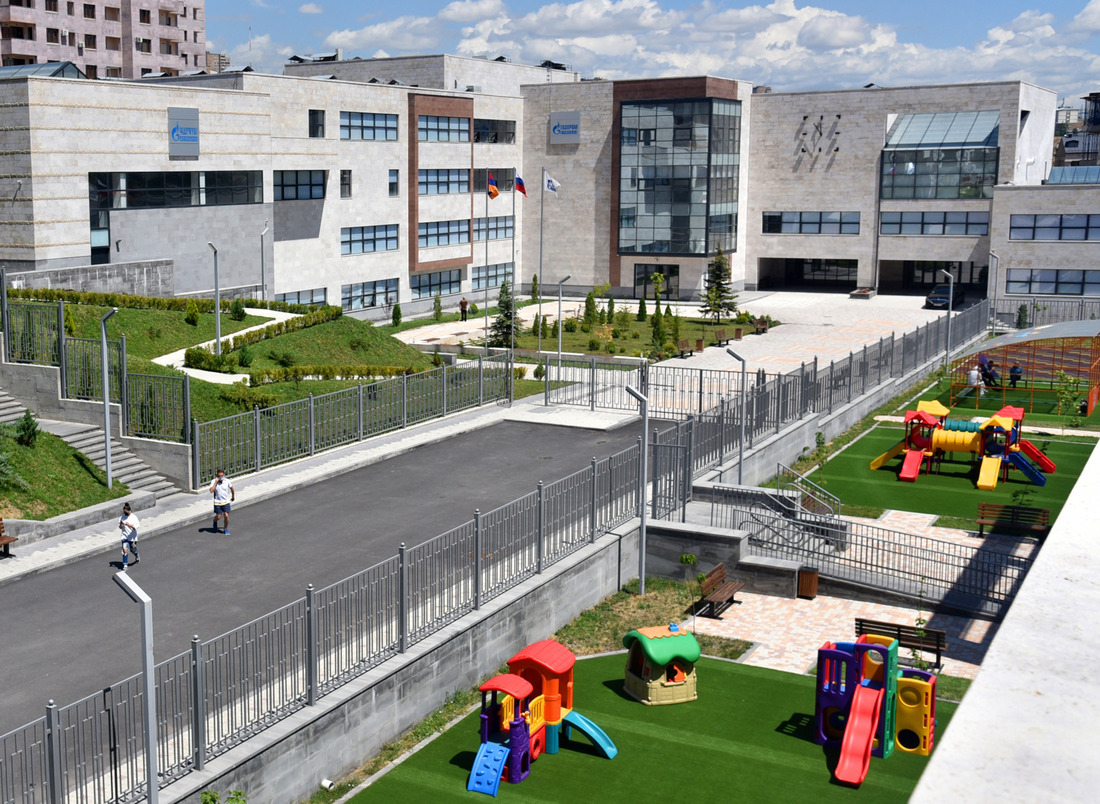 The Educational and sports complex works in two main directions: education and sports. It was put into operation In March 2019, including: a school with an indoor swimming pool, a kindergarten, an outdoor area for mini-football, an indoor skating rink, a sports and health center with 2 universal gyms and a general-purpose fitness room.

At school, intended for 700 pupils, education is carried out within the framework of general education programs for primary, basic and secondary schools (1–12 classes) with advanced (in-depth) study of Russian and English.

The Educational complex has a kindergarten for 180 children.

Gazprom Armenia has social package, which includes both intra-corporate and non-corporate directions.